While reading Lucy Suchman’s Human-Machine Reconfigurations: Plans and Situated Actions (2007), I had a moment of analogizing texts to machines. Suchman’s argument takes machines as non-human actors (with limited agency) in a network, where ties are created through sensing and communication. There’s a spectrum of engagement with respect to this network, and in Suchman’s view, the designer is present in the network.

So here I am, reading this, and I realize that the span of engagement actually captures what we’ve agreed to disagree about with respect to literary analysis. The gamut from New Criticism to symptomatic readings to Reader Response theory to authorial intent: this is what Suchman captures, except swapping out key terms. Instead of “author,” we have “designer;” instead of “reader,” we have “user.” And instead of “text,” we have “machine.” Or do we?

On page 123 of this edition, Suchman includes “Figure 8.2: The analytic framework.” This figure depicts a four-column framework breaking down the interaction between user and machine into the following: 1) actions not available to the machine, 2) actions available to the machine, 3) effects available to the user, 4) design rationale. 1 and 2 comprise the user, and 3 and 4 comprise the machine. This framework drives Suchman’s (conversation) analysis in the meat of her original dissertation: Chapter 9 in this volume. This is the center of my analogy, because I argue that this framework also captures how people and texts interact. I’m going to include a picture of my notes; please indulge me. I’ll also try to recreate it in text below. 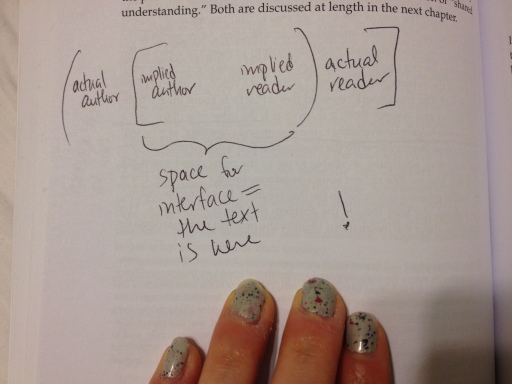 My own analogy of textual interpretation to Suchman’s User/Machine assemblage. Also, you can see my jawbreaker nails.

So the way I see it is that in Suchman’s analysis, the issue confronting human-machine interaction was the problem of communication and sensing: the machine only has access to so much, and the user only has access to so much. With reader-text interaction, it’s a very similar issue. The reader only has so much knowledge of the author’s brain to go off, and the author only has so much access to the reader’s brain. This is a general issue with all communication, I suppose, and it gets back to what I was talking about with the contextual theory of communication. But using Suchman’s framework as a model, we can begin to see the text as the surface on which the (implied) author and the (implied) reader have access to one another.

The text is the interface.