To continue from where I left off in the first post in this series, I am going to look at how people within what I consider “mainstream games criticism” (aka, the major blogs and sites) talk about League of Legends. I mentioned the two camps of posts referenced in Critical Distance: two about the player community, and one about the character. Similarly, out of eight posts on Borderhouse Blog tagged “League of Legends”, six reference character design and two discuss the player community.

Defining “character” in League of Legends can be surprisingly tricky. On one hand, champions are probably the most commonly identified “characters” in the game, with names, appearances, and particular playstyles. The champions are the face(s) of the game and they are the player’s interaction with the game world.  Like in Diablo or Warcraft, you control the character’s movement and action to an extent, with paths and autoattacks handled by the game itself.

On the other hand, champions do not persist as player avatars past the duration of a single match. This strange feature is also supported by the lore. One of Riot’s guides to gameplay identifies the summoner as the player’s persistent character, a force of political balance who fights by summoning champions.

A player in League of Legends takes on the role of a Summoner – a gifted spell caster who has the power to bring forth a champion to fight as their avatar in Valoran’s Fields of Justice. With all major political decisions on Valoran now decided by the outcome of the contests that take place in the battle arenas, a Summoner is the key force of change on the continent.

This convoluted relationship of summoner to champion allows Riot to sidestep the issues raised by quasi-persistent champions: the champion serves as the in-match “avatar” of the summoner, in the same way that the summoner serves as the invisible in-game avatar of the player. There are a few characteristics of summoners and champions that complicate the idea of character in League of Legends.

Summoners, for example, can heal their champion, damage opposing minions directly, teleport their champion anywhere in the Field of Justice they are in, fortify their team’s turret defenses, and a slew of other game-impacting results.

So we can see that summoners and champions both impact the game during a match, and summoners, though they do not have a manifestation on the field, have a direct connection with the game world.

I’m going to try to replicate a quick table here that captures the messiness of these two categories: 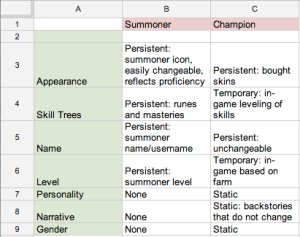 I need to flesh out the terminology, but I hope you get the idea.